In the midst of an unprecedented moment in American history, the Fourth of July is an opportunity to reflect on the complicated origins of this country. This is the date on which a very imperfect people commenced the journey to form a more perfect union based on the truth that all human beings are created equal. However, from the moment Europeans set foot on this hemisphere, the ideal of freedom for all has not materialized. The historical reality is that people of color have had their freedoms eroded in a litany of ways including slavery, Jim Crow laws, lynching, segregation, redlining, evictions, and mass incarceration. Nonetheless, the ideal remains. Hope can be found in the Black Lives Matter Movement that progress toward the ideal is possible. We stand in solidarity with the Black Lives Matter movement in recognition that the journey to freedom is far from complete, and affirm that our commitment to continue striving for a more perfect union is undiminished. 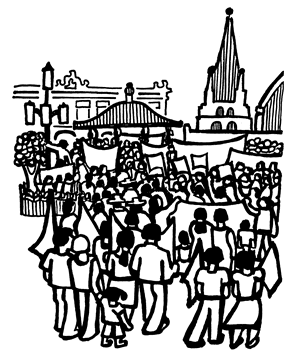 We at Annunciation House have spent the past few weeks grieving the unjust and racist murders of George Floyd, Breonna Taylor, Ahmaud Arbery, Nina Pop, Dominique “Rem’mie” Fells, Riah Miltongeor, Rayshard Brooks, Tony McDade, and too many others. Our hearts break for their loved ones and community members. We say their names, and we affirm these simple truths:

Annunciation House stands in solidarity with protesters across the United States and the world who are expressing outrage at our national failures to address the systemic racism, exploitation, and daily violence against Black people that has been a reality in this country since its very founding. We are inspired by the bravery of protesters putting their bodies on the line to demand justice. We share and support their demands for transformative change, including demilitarization and investment in communities of color.

Our work is intrinsically intertwined with Black Lives Matter and movements to end white supremacy, mass incarceration, and police brutality in the United States. The police and prison structures that oppress Black communities are mirrors and partners of ICE and CBP, which are guilty of terrorizing the undocumented, separating families, and detaining hundreds of thousands of immigrants in deplorable conditions with little or no due process. Black immigrants at the intersection of both of these systems are disproportionately detained, deported, abused, and painted as terrorists.

George Floyd and Rayshard Brooks’ brutal murders remind us of nineteen-year-old Juan Patricio Peraza Quijada, a former Annunciation House guest who was shot and killed in broad daylight on February 22, 2003 when he fled six armed Customs and Border Protection officers. Though the details of these murders are different, crucial elements are the same: all involved profiling men of color; officers ratcheting up the tension in a peaceful situation; the use of lethal force out of all proportion to the victim’s actions; and afterwards, excuses and attempts to justify the officers’ actions and evade accountability.

And yet, we recognize that the experience of Black Americans is unique, and that anti-black racism in particular is steeped in an incomparable history of American colonialism, slavery, and racial exclusion. The current movement calls us to reflect specifically on anti-blackness and to take concrete steps to improve our allyship with Black people. We recognize, for example, the problematic invisibilization of Black immigrants in discourse on immigration that is dominated by stories of Latinx migrants. Additionally, we are concerned by the fact that American systems of racial hierarchy are historically steeped in a “divide and conquer” strategy that may unintentionally hurt and divide us from Black American communities.
It is our duty to continually challenge ourselves to understand these nuances and to support our Black siblings in demanding an end to racist state violence, police brutality, and mass incarceration. We vigorously recommit ourselves to working in solidarity with Black racial justice movements to dismantle white supremacy and create a world where Black Lives Matter. ¡La lucha sigue!