At about 8:40 AM on February 22, 2003, Juan Patricio Peraza Quijada, a 19-year-old man staying at Annunciation House, found himself standing in the middle of San Antonio Street facing a semi-circle of Border Patrol Agents with their handguns drawn. One of those Agents shot and killed him. In El Paso, Juan Patricio has become a symbol of everything that is wrong with present immigration policy, the great need for just and humane comprehensive immigration reform, and the terrible consequences of the current enforcement-only immigration policy used by the US Government. Over the past fourteen years, it is a policy that has resulted in the deaths of thousands of immigrants who have died in deserts, drowned in rivers or automobile accidents, or, like Juan Patricio, been killed by Border Patrol Agents. It is a policy that has resulted in the division of families when the undocumented members of a family are detected, detained and deported, forcing one part of the family to live in the US and the other part in another country. It is a policy that has expanded the construction of detention facilities to the point that today there are now more than 30,000 detention beds being used on a daily basis in the US, with many of those beds now located in El Paso, Chaparral, Sierra Blanca, Pecos, etc. It is a policy that now regularly uses criminal prosecution with its corresponding prison sentences to punish undocumented individuals caught living and working in the US.

For many years, now, the effort to get Congress to pass just and humane comprehensive immigration reform has been politically hijacked by individuals who view immigrants as threats, terrorists, criminals, tax evaders, and drains on the societal service network. In spite of an overabundance of well researched and credible documentation that debunks all of these myths, the past decade has been marked by the implementation of an enforcement-only immigration policy.

By commemorating Juan Patricio’s life and death, it is a way for a community to again state that this is not what immigrants deserve, that this is not acceptable immigration policy, and that deaths such as that of Juan Patricio contradict the core principles of justice and human rights to which the US aspires.

In remembering Juan Patricio, we reiterate our call and commitment to work for and support justice for immigrants and the passage by the US Congress of comprehensive, just, and humane immigration reform legislation. 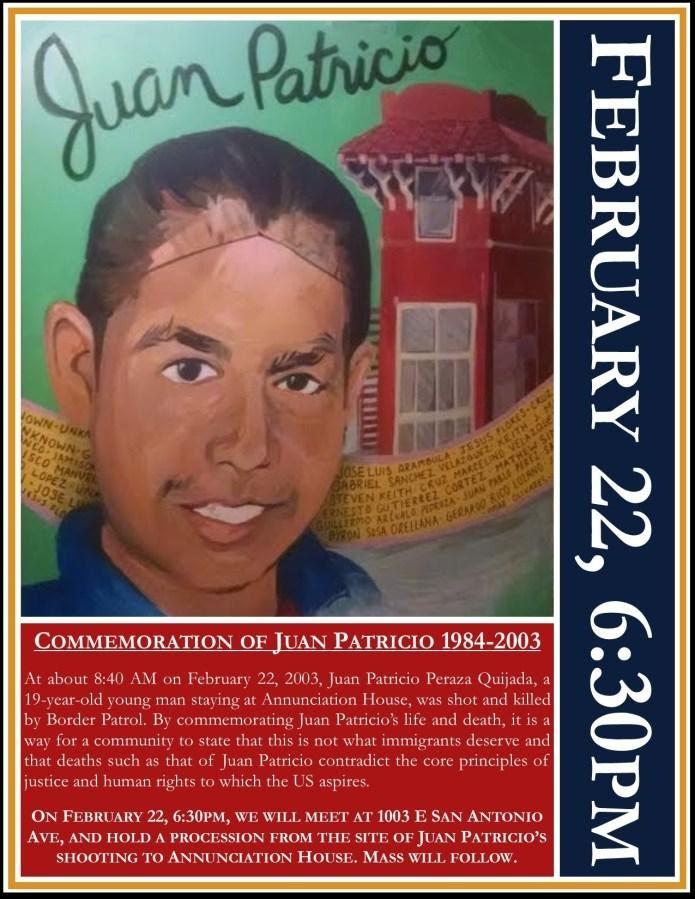