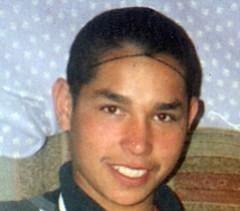 An officer spots a young man with brown skin on the street. The young man is immediately believed to have committed a crime, although there is little to implicate him in the moment except for his skin color. When confronted by law enforcement, he does not cooperate. Angry words are exchanged; the situation escalates rapidly out of control. Suddenly an officer feels threatened. He reaches for the weapon closest to hand. Shots are fired. Later the officer, claiming he acted in self-defense, will face no penalty. The young man lies dead on the pavement.

Over a decade before a young black man named Michael Brown put the suburb of Ferguson on the map of history, Juan Patricio crossed the southern border as an undocumented migrant from Mexico. Twelve years ago this February, he was taking out the trash one morning behind Annunciation House when he was stopped and questioned by members of Border Patrol. He panicked and ran. Five Border Patrol agents chased him, called in reinforcements, got him surrounded. Then a sixth agent arrived on the scene. This officer would later testify that he shouted at Juan Patricio, who then ran at him in a threatening manner, forcing the officer to shoot to protect himself. The other Border Patrol agents who were present agreed with this account in court; other eyewitnesses disputed it. What is certain is that within six seconds of this agent’s arrival, Juan Patricio had been shot dead. What is certain is that neither the agent himself, nor the organization that trained him and put a gun in his hand, faced any sanctions whatsoever for causing the death of this nineteen-year-old youth.

I never met Juan Patricio; I became a volunteer at Annunciation House the year after he was killed. But years later, I attended the civil trial in which the Border Patrol was charged with (and acquitted of) negligence in its training of the officer who fired the fatal shots. I sat with Juan Patricio’s parents as they listened to hour after hour of testimony about the day their son died—from the route he ran through backyards and between houses in an effort to evade la migra, to the precise way he fell after the bullets hit. I heard the whole chain of events that culminated in Juan’s death: how Border Patrol agents staked out Annunciation House that morning, in violation of an official policy against casual patrolling of homeless shelters; how Juan had been struck on the head during the ensuing chase, and had picked up a piece of pipe; how the final officer had arrived on the scene in a squeal of tires, and ran up shouting; and with what blinding speed the situation changed from a foot chase to a fatal shooting.

This summer, when I read of Michael Brown’s death at the hands of police officer Darren Wilson, I thought of Juan Patricio. The details were different, but crucial elements remained the same. There was the young man of color; the officer ratcheting up the tension in a difficult situation; the use of lethal force out of all proportion to the victim’s actions; and afterwards, the way that those magic words, “self-defense,” dissolved any attempt to scrutinize the shooter’s actions, to hold him accountable.

Michael Brown had just committed a robbery, I’ve heard people argue. He was combative with a police officer. These infractions are offered as justification for what happened to him next. To Juan Patricio, too, people applied the words criminal, lawbreaker, illegal, implying that he got no more than he deserved. Now, I believe in the rule of law as much as the next person; I believe we must face consequences for our actions. I acknowledge that immigration violations and petty theft are crimes—but when did they become capital offenses?

In the closing statements of the trial I attended, the Border Patrol’s lawyer argued that Juan Patricio was entirely responsible for his own death. He likened Juan to a drunk driver who gets into a crash and then says, That other car should have gotten out of my way. Our lawyer, who represented Juan Patricio’s parents, offered a different perspective. “I struggle to see how the example of the drunk driver applies here,” he said. “Perhaps a better analogy would be if a police officer pulled over a drunk driver…and shot him.”

I wasn’t present when Juan Patricio was killed—or Michael Brown, or for that matter any of the many other young men of color who have died at the hands of law enforcement under the banner of self-defense. And I will not presume to pass judgment on those crucial moments when the shots were fired. Police officers and Border Patrol agents face risks in the line of duty that I have never encountered, and to some extent, I can give them the benefit of the doubt. I can believe that each of these shooters reacted out of genuine fear, that they reached for their guns because they couldn’t envision an alternative at that point in time—because the situation already seemed completely out of their control, and this seemed to be the one way to bring themselves safely through it. I will grant them honesty in that moment.

What I cannot grant, to either them or the systems that train them, is absolution for the countless decisions, big and small, that preceded the moments the shots were fired. There must have been a hundred little choices, each reversible and insignificant on its own, that culminated in the final, undoable action—that made it seem inevitable, when it never had to be. I’m talking about the decision to rush into a standoff and shout at a cornered teen, without sparing a moment to size up the situation; or the decision to stop two black men on the street, without reinforcements, in a neighborhood where mistrust of the police runs deep. I’m talking about the daily decision, about which Darren Wilson testified to the grand jury, not to wear a taser because of its awkward bulk. I’m talking about Wilson’s placement of his gun within easy reach on the right side of his belt, and his placement of pepper spray on the left, where it was harder to access.

More broadly, more devastatingly, I’m talking about the culture of disregard for the human rights of undocumented migrants, and about the racial profiling that paints all black men as criminals and thugs, all Latino men as gang members and narcotraficantes. There is fear at the heart of these deadly encounters between our cops and our young men of color—fear of these young men. It’s a fear that will remain unaddressed, unexamined, unchallenged, as long as our justice system continues to absolve every officer of any wrongdoing, provided he claims he was shooting in self-defense. In refusing to even indict these officers, the courts remove every incentive for them to even hesitate before using deadly force. An officer in a tight spot need make no calculations as to whether the punishment fits the crime, whether the decision to shoot can be defended or justified. He knows the courts will accept his version of what happened—and that a dead man never gets to tell his side of the story.